Speaker: Sun Shil Kim (a substitute for the author not participating in the meetings of the Lord's day). Now the mp3 file is freely available from ACS ( see http://www.softconference.com/ACSchem/slist.asp?C=4321, Fuels, ... 29-02-0052).

Nota bene! The non-enzymatic technology on the efficient bioconversion of biomass to biofuels offered by this article was now celebrated as one of the presidental Green Chemistry Challenge Awards 2015 for a company Renmatix on July 13 in a ceremony held in Washington, D.C., but the Korean government, universities and companies throw a veil over it (Prof. Y.K.Kim). In a recent article, it is suggested that cellulose disruption occurs only above 150 degrees Celsius. (S.V.Pingali et al., Deconstruction of biomass enabled by local demixing of consolvents at cellulose and lignin surfacees, PNAS, 117, 29, 21 July 2020, 16776-16781). But by the non-enzymatic technology of electronic proton pumping, it was proved that the celluloses can be decontructed into C6 sugar glucoses at about 100 degrees Celsius or below. Cf. the chemical explanation paper ( 1-1-2011-5030662-53, 14 Oct.2011) previously offered to the Korean Patent Office by Prof. Young Kyu Kim (Noted on July 31, 2020).

ATP (Adenosine triphosphate) can be synthesized directly from AMP (Adenosine monophosphate) without the intermediacy of biomolecular or genetic ligation enzymes.

Authors of a recent article ("Crystal structure of a DNA catalyst", Nature (14 Jan. 2016) 529, 231-2340 state, "Although the role of metal ions remains unclear, these data are consistent with the critical role of the non-bridging pro-Sp phosphate oxygen of dA13 in activating the 3'-OH group to promote RNA ligation."  However,  a recent experiment (20 Nov. 2015, unpublished data gained from Bruker Vertex 70 within the Bruker Optics Korea with help of Dr. Young Sup Roh in the computer program control, as an example of strong evidence for the direct synthesis of ATP from AMP to be advanced without the interactions of enzymatic complexes in the inner living organisms, 31.Jan. 2018) proves that ATP can be sythesized more directly from AMP than from ADP by the supply of ultra pure water and phosphate acid within the cellulose polymer linked to the anode and cathodes (coated by fluorine resin) of electrode potential difference (31 March 2016). In supporting this, the following result might be cited cautiously: "Initialization of H+ pumping  into the vesicle lumen was triggered by the addition of ATP and Mg2+, which are non-membrane-permeable and thus only activate proton pumps with outward-facing ATP-binding domain (Fig. 1A) (12). ....... whereas controls peformed without Mg2+, ATP, or AHA2R showed non response (fig. S6D)."(D.Stamou et al., Direct observation of proton pumping by a eukaryotic P-type ATPase, Science 351, 25 Mar. 2016, 1470, cf. Y. Gao & W.Yang, Capture of a third Mg2+ is essential for catalyzing DNA synthesis, Science 352, 10 June 2016, 1334-1337 - this tip citation is added on 13.09.2017 by Prof. Y.K.Kim).  About water as a proton donor, no reference may be provided from the water fuel cellulose cells to the following critical report: "...., water acts simultaneously as a promoter and as a catalyst in the production of Li2O2, regenerating itself through a sequence of steps that include the formation and recombination of H+ and OH-."(N.M. Markovic et al., Water as a Promoter and Catalyst for Dioxygen Electrochemistry in Aqueous and Organic Media, ACS Catalysis, 2015, 5, 6601), for the consuming of H2O or D2O has been evidently observed by a new generating outwards of waters (07 May 2016. unpublished). As in a summary review (Nature 491, 15  Nov. 2012, 374-383) and other studies, if the decline in electron transport chain and deficiency of ATP production have "been linked to numerous human disorders, ranging from rare genetic syndromes to commom diseases, such as neurodegeneration, cancer, and diabetes, as well as the aging process itself" (Science, Vol 352, Issue 6282, 8 April 2016, 231- 235), the simple proton pumping instrument as suggested by our research institute might be acutely available for the future healthy life of the human beings against the threathening of numerous human sufferings including the abruptly infectious diseases. Nevertheless, at least now, it is suggested that no man should treat the redox balance in the chemical reactions and the problems of the standard reduction potentials without considering the conditions of the proton hopping or pumping of the water molecules (21 May 2016)(Prof. Y.K.Kim). A recent example of the wound healing tested by the textile-based electric bandage patterned with silver and zinc polka dots (see Tien, Bandage zaps biofilm infections, C & EN, November 13, 2017, 9) may be accounted for an evident application pertaining to the proton pumping device activating ATP production with the innermost absorbed water of bodies( by Prof. Y.K.Kim, November 24, 2017).  See also the bustling activities of mitochondria as energy distributors inside the flexible cells (07.11. 2018, Prof. Y.K.Kim)

On 23 May, 2012, the research institute firstly achieved in running a DC motor by supplying only the daily water upon 3 sheets (11 x 11 cm)of the natural cellulose papers. At the Summer Education Program of 2011, the research institute introduced the technology of the non-catalytic water fuel cellulose cell advanced from the non-catalytic water fuel polymer cell, which was invented in 2008 and has been presented in the educational programs for the Christian family since 2009. But the most modules of cells has failed in running a DC motor on account of the feeble production of electric currents. In the recent experiments, Prof.Young Kyu Kim achieved in running a DC motor by using a new electrode and the wider, natural cellulose papers.(06 June, 2012). See applications of the water fuel paper cell(12 V) for the daily life (15.06.2013). See also I-V curve & power graph of the water fuel paper cells assembled with magnesium cathodes(11.5x23 cm) coated by the corrosion-resistant material, as generated by supply of extremely pure water(22.01.2014). On this device to product electricity directly from water molecules by irreversible proton pumping without electrolysis processing, a first patent in the world timeline of invention and technology is recently granted (Nr. 10-1398077)(15.05.2014). See a new recent article about the - like an atomic-scale bucket brigade(C & EN, V.93, Issue 12, p.6, March 23, 2015)-proton pumping of the so-called hydroxyl holes within our cellulose polymer for the non-catalytic water fuel cellulose cell: Franz M.Geiger et al., Aqueous proton transfer across single-layer graphene, Nature Communications (17 Mar 2015)(DOI:10.1038/ncomms7539) (23.03.2015) and the chemical explanation papers (especially 1-1-2011-5030662-53, 14 Oct.2011) of Prof. Young Kyu Kim on the same theory previously offered to the Korean Patent Office (25.03.2015). See the recent application examples of the non-catalytic water fuel cellulose cells (12V) for power source of the aquaponic cycle, as exhibited in the International Materials & Components Industry Show 2015 (Aug. 19-21, 2015) and another example for aquarium (05 Sept.2015) and for LEDs (23 March 2016). Cf. a recent report on the OH defect sites promoting the high mobility of protons also in the similar principle: Munehiro Inukai et al., Encapsulating Mobile Proton Carriers into Structural Defects in Coordination Polymer Crystals: High Anhydrous Proton Conduction and Fuel Cell Application (J.Am.Chem.Soc., Article ASAP, DOI:10.1021/jacs6b03625, Pub. Date (Web): June 21,2016 (02 July 2016, Prof. Y.K.Kim). As in case of the hydrogen peroxide fuel cellulose cell, it is so lightly demonstrated that the hydrogen fuel cell can be also operated by nanocellulose membranes: Thomas Bayer et al, High Temperature Proton Conduction in Nanocellulose Membranes: Paper Fuel Cells, Chemistry Materials, 2016, 28(13), pp 4805-4814. However, the critical task remains now still laborious, how the submolecular or subatomic mechanism in the metallic catalysis like that of platinum can be explained (05 September 2016,  corrected on 25 November 2016, Prof. Y.K.Kim). A nearby answer to the subatomic mechanism of metallic catalysis is offered by a recent article (J.H.K.Pfisterer et al., Direct instrumental identification of catalytically active surface sites, Nature 549, 7 September 2017, 74-77), in which the strong noise sites are explored being detected so in the defects or boundary locations of the metallic difference of electronegative potentials, as in the sites of dramatic noises having been observed due to the same metallic difference of electronegative potentials in the hydroxyl (OH) holes of the cellulose (Added on 16. 09. 2017 by Prof. Y.K.Kim). According to results of the recent research, it is suggested that the breakdown of electrons can take place a few hundreds of zeptoseconds (with regard to the not-proved Lyman limit of photoemission - added on 16. 09. 2017 by Prof. Y.K.Kim) ~ a few tens of attoseconds prior to or faster (cf. C.Palatchi et al., Atomic delay in helium, neon, argon and krypton, J.Phys. B.: At. Mol. Opt. Phys. 47, 03 December 2014, 2450003: ".... cannot determine the absolute [time] delay difference between atoms due to lack of precise knowledge of the initial conditions.": Added on 12. 09. 2017, Prof. Y.K.Kim)  than the hopping or pumping of protons, cf. M.Osiander et al., Attosecond correlation dynamics, Nature Physics, Published online 07 November 2016, DOI: 10.1038/nphys3941 and B.Wolter et al., Ultrafast electron diffraction imaging of bond breaking in di-ionized acetylene, Science 354, issue 6310, 21 Oct. 2016, 308-311 (24 November 2016, Prof. Y.K.Kim).

Since 2011(2009) by now (2019), however, the Korean Intellectual Property Office of the Korean Government has rejected the non-catalytic water fuel cellulose cell to enroll as a new invention in their inventory lists, because of the following reasons, d. h. that the proton pumping cellulose paper will be the same as separator paper in the Volta battery (A), the purest water in B and C  be the same as a electrolyte like the salt water in A, and the coating technology of C on the cathode coated by the Teflon resin be not a new technology, which has been generally used for the electrochemical corrosion resistance on the electrodes. Although two inventions (B and C) are of the same inventor, moreover, it should be rejected because the invention of C is only the imitation of the previous opened invention of B. If one should be confronted with these scandalous resolutions of the officers, no one might want to enroll as a new invention of the Korean inventory lists about his own invention. 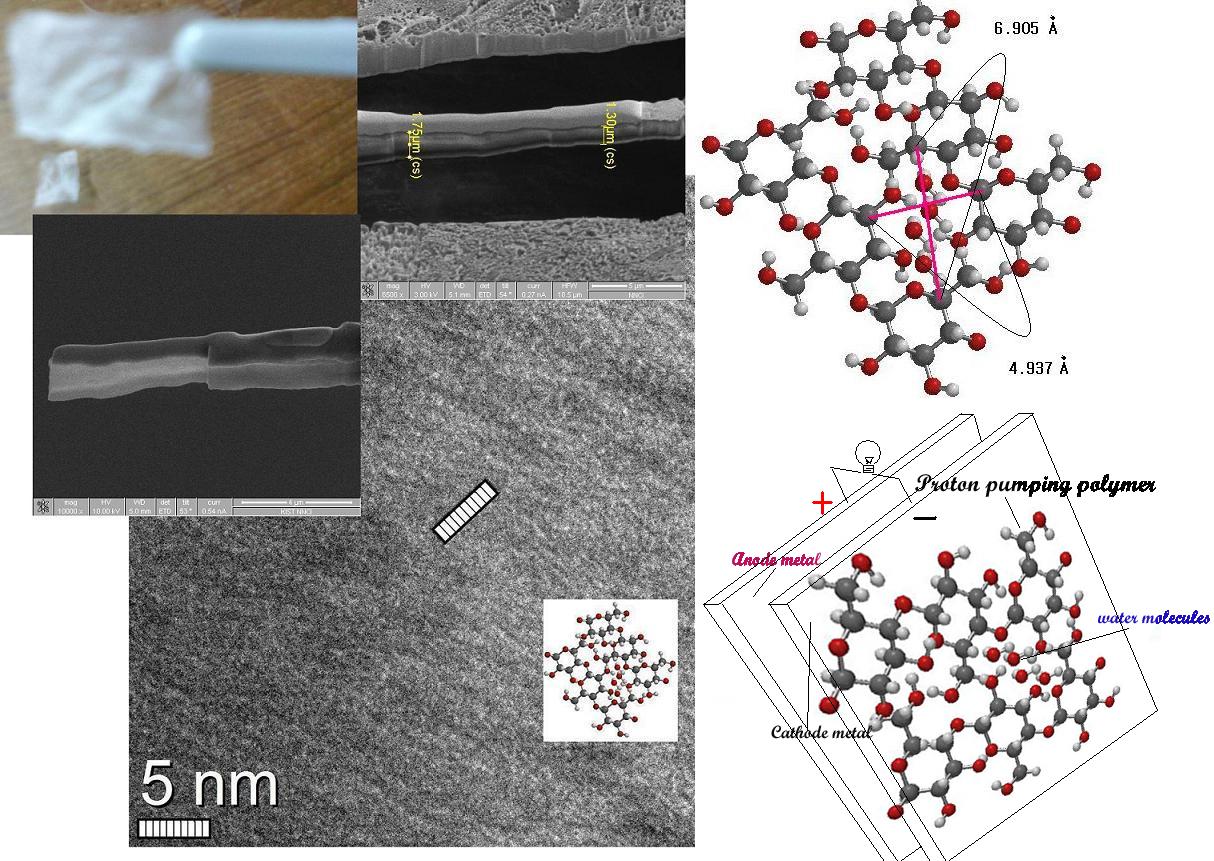 (This unpublished figure of Prof. Y.K.Kim had been opened partly in the preprint of his oral presentation (2011) and offered for the Korean patent office, Korean patent court and newspaper offices in the details. FIB data had been offered by Jy Young Lee, and TEM data by Jong Min Kim both from the Korea Institute of Science and Technology, 2009 ) 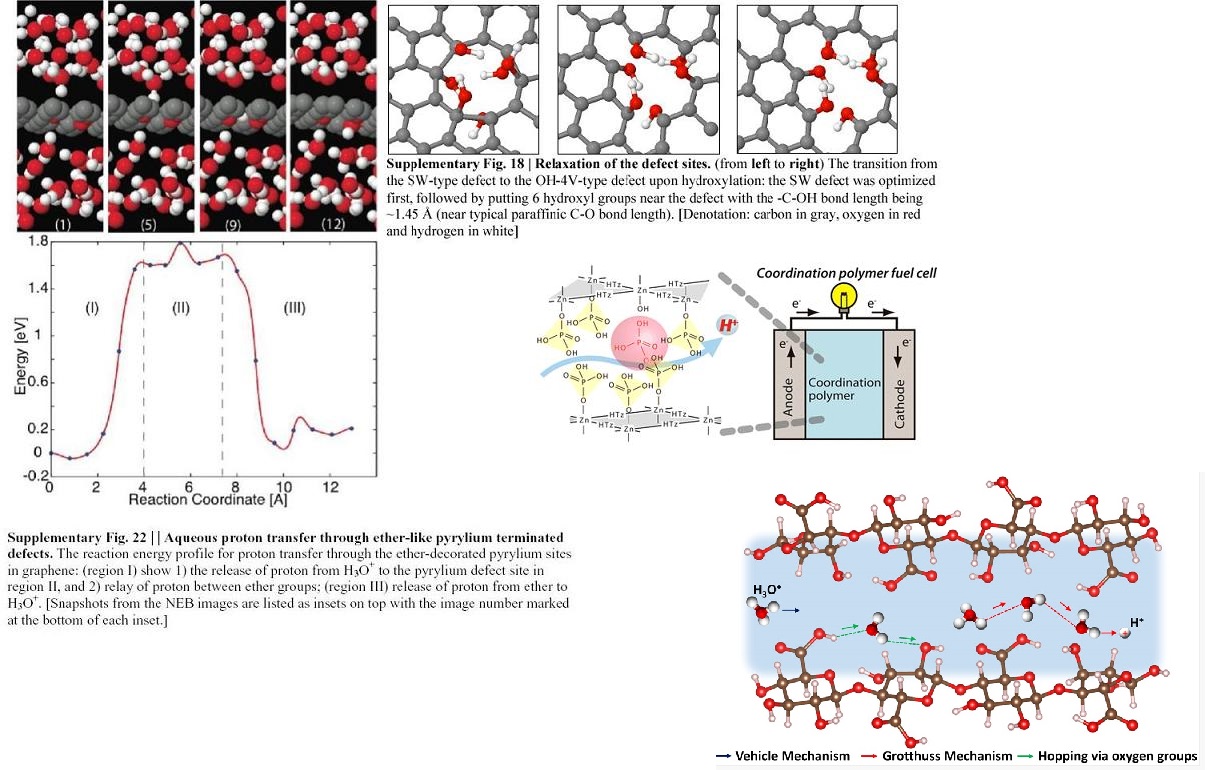